How Karate Can Prevent Bullying 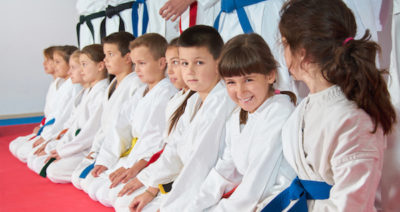 When you introduce karate into a kid’s daily or weekly routine, you’re preparing them for the fact that they may, at some point, face the teasing or attack of a bully. By giving them the means to defend themselves, they’re much more likely to not only know what to do in the event of an attack, but they’re also more likely to prevent such an occurrence in the first place.

Through the practice of karate, kids learn to be more confident in their actions and manners. Generally, a bully is going to pick on a kid who seems weak, soft-spoken, or unsure of themselves. With their newfound confidence, kids who learn karate are much less likely to be picked on.

Discipline is an inherent part of any karate class. Kids are taught to listen and respond when spoken to, minimizing distractions and outbursts during class. This spills over into the classroom, as we as in daily interactions with others. If a kid is picked on or taunted by a bully, the discipline learned in karate keeps them from acting out in response.

If things do escalate, you know that your child has been taught the skills to defuse a physical attack. Rather than launching a counter-attack against a bully, a child who has been taught karate will do what is best in the situation and defend themselves without causing further unnecessary harm.

At Karate Families, we teach kids the art of karate and self-defense as early as 3 years old. Kids who take our classes know the importance of confidence, discipline, and self-defense, and are quick to learn what they need to know in order to prevent a bully attack. To find out more about our kids and family class offerings, contact us today.